And now, the one you’ve all been waiting for:

Tune in tomorrow when your long nightmare of horrifying babies will be a distant memory, and you can enjoy a new installment of the Turd– ‘scuse me, Turning of the Worm: The Book of Bones and an announcement about the next Thing of the Week!

This may be my favorite thing I’ve ever drawn: 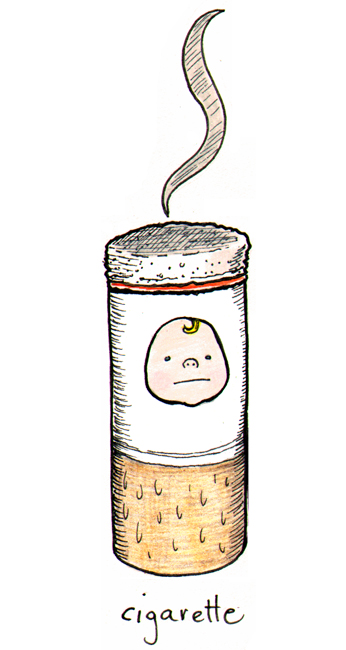 Sheer nobility in the face of adversity.  Cigarette Baby is an American Hero.

Sometimes you use the opportunity to dress like you did in your heyday.  “Dude, I’m totally going to be 80’s Guy for Halloween!” But when a baby goes retro for Halloween, it has but one choice:

We’ve all seen people in “bad idea” Halloween costumes.  In fact, one or two of you may have actually sported them yourselves, in your foolish youth.  I generally liked to keep the costume classy then embarrass myself at the party with my actions rather than my appearance, but that’s just me.  Anyway, when an adult or adult-type person wears a completely stupid costume, it was their choice, and they have only themselves to blame when their Sexy Witch unitard splits up the middle in 35 degree weather and they have no money for a cab because Sexy Witches don’t carry purses.

But kids – specifically babies – well, hell, you can put them in anything!  They’re barely sentient All Hallow’s Props.  You see parents carrying their infant blobs around dressed as a blobby pumpkin or a blobby puppy, with their confused face peeking out, and yeah, they’re cute, but come ON — how about some originality, some imagination?

And with that long-winded intro I bring you day one,  Ice Cream Cone: 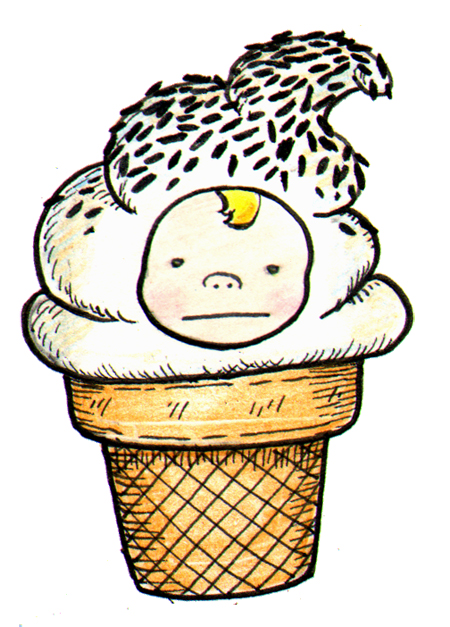 Warning:  These are going to get worse.  A lot worse.